The Judiciary of Zambia in collaboration with the World Bank, PACRA, and INSOL International held a training workshop for the Hon. Judges of the Superior courts from Monday 9th July 2018- Friday 13th July 2018. The workshop aimed at familiarising the judges with the Movable Properties Security Interest (MPSI) Act of 2016 and the Insolvency Act of 2017. Among the topics covered were those such as the Fundamental Principles of MPSI, the Role of Credit Reporting Bureaus, Courtroom Management, General Principles of Insolvency and Business Rescue, which were particularly topical areas of discussion owing to the role that commercial transactions play in the economy of the nation and the world at large at large.
The coming into effect of the MPSI Act ensures that individuals and small and medium businesses that do not own real property will find it easier to secure a credit line using the whole or part of their personal or movable assets as collateral. The five day workshop held at the Protea Safari Hotel in Chisamba ensured that the adjudicators are not to be left behind in these changing MPSI and insolvency trends.
The Hon. Deputy Chief Justice Mr. Justice Marvin S. Mwanamwambvwa in his remarks that marked the official opening of the workshop alluded to this fact when he said “As you may be aware, the Government of Zambia recently introduced legislative and institutional reforms to create a conducive environment for business and to stimulate growth in the national economy. The enactment of the MPSI Act and the Corporate Insolvency Act is a culmination of these reforms”.
He thanked the facilitators who stemmed from Zambia, Canada, South Africa and the United Kingdom for sharing their wealth of knowledge, and the Judges for their participation.

The Constitutional Court Session Scheduled to ….

How to Apply for Grant of Letters of Administration 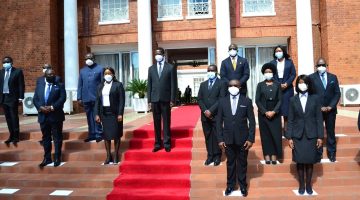 Swearing-in of Hon. Judges of the High Court