You are at Home 2022 November 23 News Courtesy Call on His Lordship the Hon. Chief Justice by the Ambassador of The United States of America to Zambia

The Chief Justice thanked the Ambassador for the courtesy call on the Judiciary and the role that the American government has continued to play in Zambia, particularly in the justice system.

In his remarks, the Hon. Chief Justice said the judiciary faces a myriad of challenges, chief among them are issues relating to infrastructure. He highlighted the fact that the 2016 constitutional amendment established two new courts in the name of the Constitutional Court and the Court of Appeal, but that no corresponding court infrastructure had been built. He said that the newly established Economic and Financial Crimes Court has equally to fit into the existing infrastructure. His Lordship noted the need for the Judiciary to move from the existing Record Management System to a fully fledged Case Management System. While on the issue of digitization, the Chief Justice alluded to the fact that there is need for the Court Reporting Unit to be availed with machines which are costly.

The Hon. Chief Justice further the need for capacity building of adjudicators and judicial officers in economic and financial matters, which are by their nature, complex, by their nature complex, in order for them to ably execute their duties.

In response Mr. Michael C. Gonzales thanked the Hon. Chief Justice for the warm welcome. He informed the Chief Justice that the United States government recognizes that the Judiciary is a key governance ally. He said that the judiciary plays a critical role in enhancing public confidence in the government, in general. He indicated that it was important for him to know and appreciate the challenges that the judiciary is facing so that when opportunities for collaboration arise, he may be in a proper position to advise the areas of need for the Zambian Judiciary. He pledged support in capacitating the judiciary in training of adjudicators and other staff members, as and when opportunities present themselves.

In echoing the Chief Justice’s remarks, the Deputy Chief Justice, Justice Michael Musonda, SC, reiterated that the Judiciary is in need of support in training of

its staff and capacitating the court reporting and information technology units so as to assist with the dispensation of justice.

Accompanying Hon. Chief Justice and the Deputy Chief Justice were Justice E. M. Hamaundu, Justice A. M. Wood and Justice N. Mutuna. Also in attendance was Mr. David Chibanda the Political Specialist at the Embassy of the United States of America

Courtesy Call on His Lordship the Hon. Chief Justice by the Ambassador of the United States of America 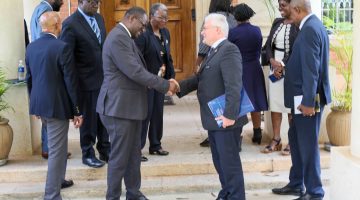 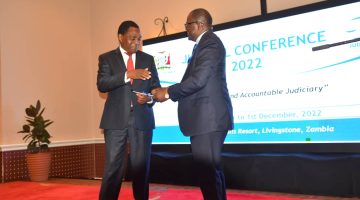